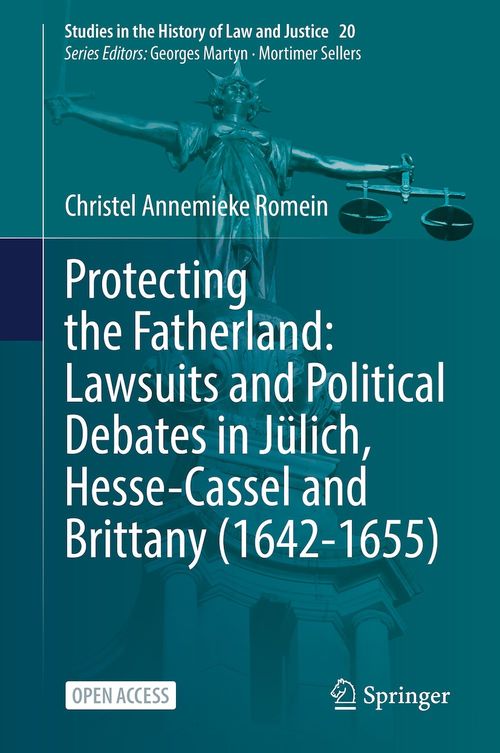 Protecting the Fatherland: Lawsuits and Political Debates in Jülich, Hesse-Cassel and Brittany (1642-1655)

This open access book presents a comparative analysis of the use of fatherland terminology in a political and legal context in Jülich, Hesse-Cassel and Brittany from 1642 to 1655. Fatherland terminology includes words such as patria, patriot and nation. In historiography, the use of these words by the nobility is often interpreted as an early sign of nationalism that conflicted with the prince's initiation of state-building. The book argues that neither `states' nor `nationalism' truly existed yet; rather, the political arena was dominated by dynasties. Further, it rejects the notion of deliberate state-building and demonstrates that the nobility used this terminology to object to princely politics as part of adopting a "presupposed office." This status allowed the nobility to place itself outside the ruler-subject constellation and critique the situation. The Duchy of Jülich and the Landgraviate of Hesse-Cassel are used as examples of small economies of scale with homogenous nobilities, and ones where the Thirty Year's War hit hard - which led to the illegal levying of taxes and the billeting of soldiers, and in turn to the nobility critiquing princely politics. In contrast, the Duchy of Brittany, with its large economy of scale and heterogeneous nobility, found an alternative way of pursuing its interests and keeping taxes as low as possible. The goal of this book is to discuss and present three representative cases that offer insights into how the nobility safeguarded the welfare and prosperity of the fatherland and its inhabitants.