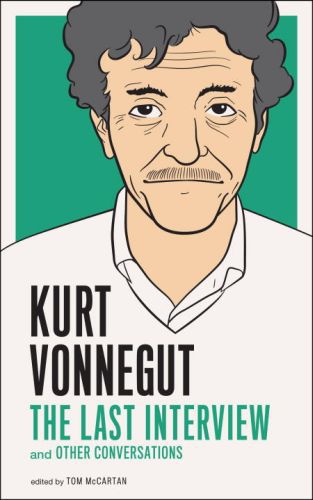 One of the great American iconoclasts holds forth on politics, war, books and writers, and his personal life in a series of conversations--including his last published interview.
During his long career Kurt Vonnegut won international praise for his novels, plays, and essays. In this new anthology of conversations with Vonnegut--which collects interviews from throughout his career--we learn much about what drove Vonnegut to write and how he viewed his work at the end.
From Kurt Vonnegut's Last Interview Is there another book in you, by chance?
No. Look, Im 84 years old. Writers of fiction have usually done their best work by the time theyre 45. Chess masters are through when theyre 35, and so are baseball players. There are plenty of other people writing. Let them do it.
So whats the old mans game, then?
My country is in ruins. So Im a fish in a poisoned fishbowl. Im mostly just heartsick about this. There should have been hope. This should have been a great country. But we are despised all over the world now. I was hoping to build a country and add to its literature. Thats why I served in World War II, and thats why I wrote books.
When someone reads one of your books, what would you like them to take from the experience?
Well, Id like the guy--or the girl, of course--to put the book down and think, ldquo;This is the greatest man who ever lived.