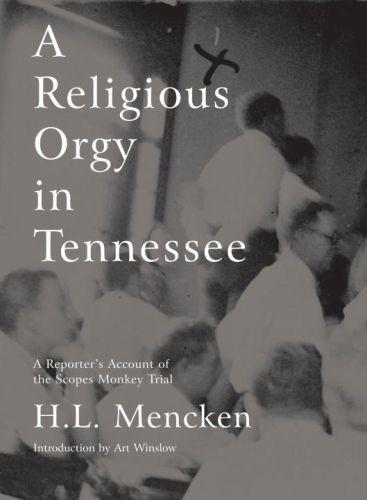 "The native American Voltaire, the enemy of all puritans, the heretic in the Sunday school, the one-man demolition crew of the genteel tradition." -Alistair Cooke on H.L. Mencken Fiercely intelligent, scathingly honest, and hysterically funny, H.L. Menckens coverage of the Scopes Monkey Trial so galvanized the nation that it eventually inspired a Broadway play and the classic Hollywood movie Inherit the Wind.
Menckens no-nonsense sensibility is still exciting: his perceptive rendering of the courtroom drama; his piercing portrayals of key figures Scopes, Clarence Darrow, and William Jennings Bryan; his ferocious take on the fundamentalist culture surrounding it all--including a raucous midnight trip into the woods to witness a secret holy roller service.
Shockingly, these reports have never been gathered together into a book of their own--until now.
A Religious Orgy In Tennessee includes all of Menckens reports for The Baltimore Sun, The Nation, and The American Mercury. It even includes his coverage of Bryans death just days after the trial--an obituary so withering Mencken was forced by his editors to rewrite it, angering him and leading him to rewrite it yet again in a third version even less forgiving than the first. All three versions are included, as is a complete transcript of the trials most legendary exchange: Darrow blistering cross-examination of Bryan.
With the rise of intelligent design, H.L. Menckens work has never seemed more unnervingly timely--or timeless.