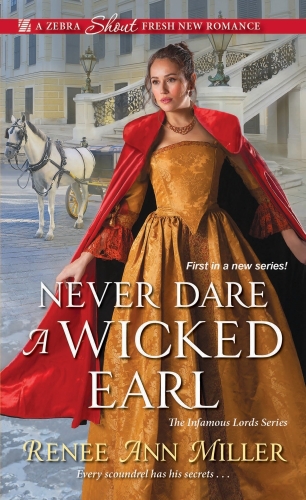 A ZEBRA SHOUT FRESH NEW ROMANCE
They are the infamous lords, unrepentant rogues whose bad behavior makes for good gossip among the ton. But these sexy scoundrels have stories no one knows. And it takes a special touch to reveal the true hearts behind their devilish disguises . . .
Known as a brazen philanderer, Hayden Milton, Earl of Westfield, is almost done in by a vengeful mistress who aims a gun at a rather essential part of his anatomy--but ends up wounding his thigh instead. Recuperating in his London townhouse, Hayden is confronted by his new medical attendant. Sophia Camden intrigues him, for behind her starched uniform is an enticing beauty better suited for bedding than dispensing salves and changing bandages.
Unshaken by his arrogance, not to mention impropriety, Sophia offers Hayden a dare: allow her ten days to prove her competency. If she resigns in exasperation like her two predecessors, she will be beholden to this wicked seducer. As a battle of wills begins, Sophia finds herself distracted by the earl’s muscular physique . . . and discovers that the man within longs only for a second chance to love.