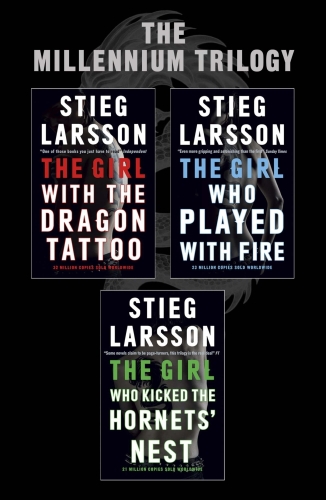 Discover the books that changed the way the world reads crime.The Girl with the Dragon Tattoo: Forty years ago, Harriet Vanger disappeared from a family gathering on the island owned by the powerful Vanger clan. Her uncle employs disgraced journalist Mikael Blomkvist and tattooed hacker Lisbeth Salander to investigate. When the pair link Harriet's disappearance to a number of grotesque murders, they begin to unravel a dark family history... The Girl Who Played With Fire: Lisbeth Salander is now a wanted woman, on the run from the police. Mikael Blomkvist, editor-in-chief of Millennium magazine, is trying to prove her innocence. Yet Salander is more avenging angel than helpless victim. She may be an expert at staying out of sight - but she has ways of tracking down her most elusive enemies. The Girl Who Kicked the Hornets' Nest: Salander is plotting her final revenge - against the man who tried to kill her, and against the government institutions that very nearly destroyed her life. With the help of journalist Mikael Blomkvist and his researchers at Millennium magazine, Salander is ready to fight to the end.