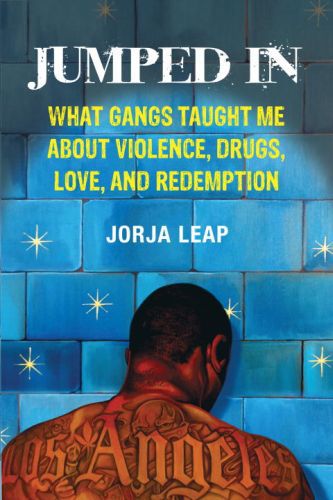 Jumped In tells the story of the gangs of Los Angeles in the words of the gang members themselves as well as the people who interact with them on a daily basis--trying to arrest them, control them, and help them. There are priests and police officers, murderers and drug dealers, victims and grieving mothers, and other assorted characters, often partnering in unlikely ways. Jorja Leap's work draws upon intimate material, from interviews to eyewitness accounts, telling the deeply personal stories of current and former gang members who span three generations, as well as the dilemmas Leap herself faces as she struggles to adjust to marriage and motherhood--with a husband in the LAPD and a daughter in adolescence. Jumped In is a chronicle of the unexpected lessons gang members taught her when she was busily studying them. Ultimately, it is a book about attachments and commitments, loyalties and betrayals, drugs and guns, sex and devotion.
When Leap began studying Los Angeles gang violence in 2002, she set out not so much to provide a solution but to find out what was being done and who was doing it. The stakes couldn't have been higher: a child or teenager is killed by gunfire almost every three hours--nearly eight times a day--and homicide is the primary cause of death of African American males between the ages of fifteen and thirty-four. During her years of research, this petite white woman from UCLA gained the trust of gang interventionists and access to their inner world. She sat in the living rooms, stood at the crime scenes, and drove through the housing projects. Through the oral histories, personal interviews, and eyewitness accounts of current and former gang members, readers come to understand gangs and the forces that pull people into them.
First we get the lay of the land: the genealogy and geography of gangs and sub-gangs, territories within territories. But the centerpiece of the book is really the stories of those people who live "la vida loca," as well as the experiences of those trying to make things better. These stories are told in Leap's candid first-person voice, as she introduces us to gangland residents such as Tray, a young father trying to go straight who is nonetheless felled by a bullet, and Joanna, a third-generation gang member, who speaks of forbidding her mother to sell drugs around her baby granddaughter. We also ride along with Leap and Big Mike, a former "original gangster" who now does street peace ministry. We see the successful "Jobs not Jails" program at Homeboy Industries and learn that former gangsters make good paramedics and firefighters, accustomed to dangerous situations as they are. With an anthropologist's eye and a compassionate heart, Leap offers not a prescription for solving the gang problem, but a gritty yet hopeful portrait of violence and redemption.