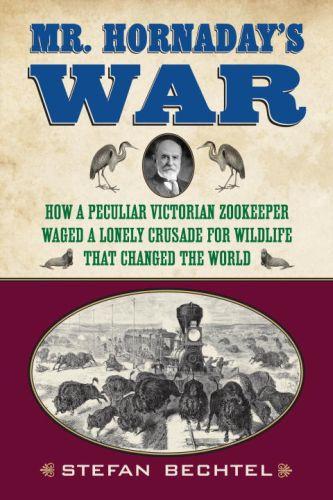 He was complex, quirky, pugnacious, and difficult. He seemed to create enemies wherever he went, even among his friends. A fireplug of a man who stood only five feet eight inches in his stocking feet, he had an outsized ambition to make his mark on the world. And he did. William Temple Hornaday (1854-1937) was probably the most famous conservationist of the nineteenth century, second only to his great friend and ally Theodore Roosevelt. Hornaday's great passion was protecting wild things and wild places, and he spent most of his adult life in a state of war on their behalf, as a taxidermist and museum collector; as the founder and first director of the National Zoo in Washington, DC; as director of the Bronx Zoo for thirty years; and as the author of nearly two dozen books on conservation and wildlife. But in Mr. Hornaday's War, the long-overdue biography of Hornaday by journalist Stefan Bechtel, the grinding contradictions of Hornaday's life also become clear. Though he is credited with saving the American bison from extinction, he began his career as a rifleman and trophy hunter who led "the last buffalo hunt" into the Montana Territory. And what happened in 1906 at the Bronx Zoo, when Hornaday displayed an African man in a cage, shows a side of him that is as baffling as it is repellent. This gripping new book takes an honest look at a fascinating and enigmatic man.