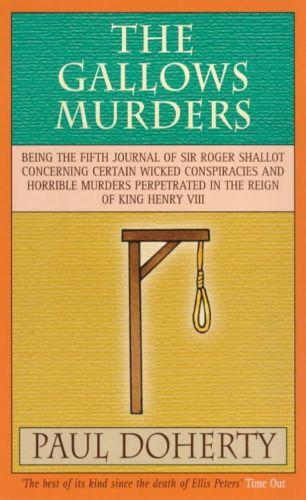 Rodger and Benjamin delve into the underworld of Tudor Britain...
Conspiracy and murder combine to threaten Roger Shallot's own life in his fifth journal, The Gallows Murders, from acclaimed author Paul Doherty. Perfect for fans of Ellis Peters and Susannah Gregory. In the summer of 1523, the hot weather and the sweating sickness provide a fertile breeding ground for terrible murders and the most treasonable conspiracies. King Henry VIII has moved the court to Windsor where he slakes his lusts whilst the kingdom is governed by his first minister, Cardinal Wolsey. Someone is sending the King threatening letters from the Tower, under the name and seal of Edward, one of the princes supposedly murdered there, demanding that great amounts of gold be left in different parts of London. If the orders are not carried out, proclamations will be published throughout the capital which, coinciding with the outbreak of plague, may make it look as though the hand of God has turned against the Tudors for usurping the throne. Wolsey has only two people to turn to: his beloved nephew, Benjamin Daunbey, and Daunbey's faithful servant, Roger Shallot. Benjamin and Roger become embroiled in the murky Tudor underworld and the pressure to solve the mysteries mounts when King Henry threatens that Roger Shallot's life depends on it.What readers are saying about Paul Doherty:
'Light, light, light, but clever, clever, clever. And amusing. A relaxing afternoon's read!'
'Excellent book, kept me guessing 'til the end'
'Paul Doherty weaves a tangled web of murder and intrigue'