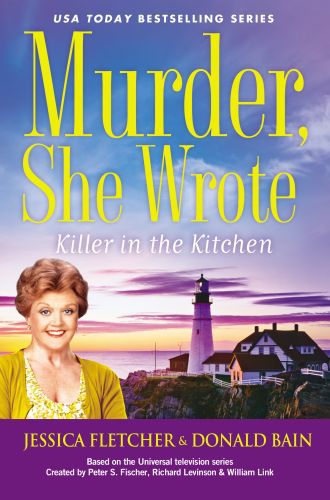 Murder, She Wrote: Killer in the Kitchen

In the newest mystery in the USA Today bestselling series, there’s a battle brewing in Cabot Cove between two eateries. But when one of the combatants becomes a fatality, Jessica Fletcher will have to get cooking and find a killer…
Jessica may not know everything about food, but she knows what she likes--and she definitely likes the Leg & Claw restaurant. Opened last summer by young couple Brad and Marcie, the Leg & Claw is their dream come true, combining Marcie’s sunny personality with Brad’s deft hand in the kitchen. But now their dream is turning into a nightmare.
Gerard “Pepe” Lebeouf is a renowned New York City chef who has a summer home in Cabot Cove. And now he’s decided to open two new restaurants in Cabot Cove--in an old warehouse right next to the Leg & Claw.
As Lebeouf and his crew renovate the warehouse, the people of Cabot Cove slowly come to the realization that the town’s newest celebrity may be more trouble than he’s worth. His “assistants” are little more than thugs, and the haughty Lebeouf is nowhere near as charming as he seems--leading to a nasty confrontation with Brad.
So when Lebeouf is found dead with a knife planted in his chest, Brad naturally becomes suspect number one. But plenty of others had a motive to kill Pepe, and it’s up to Jessica to uncover who really added a murder to the menu.