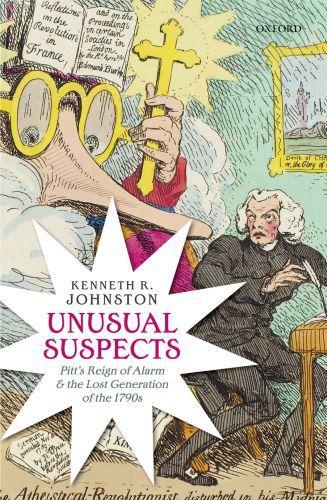 Unusual Suspects: Pitts Reign of Alarm and the Lost Generation of the

Robespierres Reign of Terror spawned an evil little twin in William Pitt the Youngers Reign of Alarm, 1792-1798. Terror begat Alarm. Many lives and careers were ruined in Britain as a result of the alarmist regime Pitt set up to suppress domestic dissent while waging his disastrous wars against republican France. Liberal young writers and intellectuals whose enthusiasm for the American and French revolutions raised hopes for Parliamentary reform at home sawtheir prospects blasted. Over a hundred trials for treason or sedition (more than ever before or since in British history) were staged against the usual suspects - that is, political activists. But other, informal, vigilante means were used against the unusual suspects of this book: jobs lost,contracts abrogated, engagements broken off, fellowships terminated, inheritances denied, and so on and on. As in the McCarthy era in 1950s America, blacklisting and rumor-mongering did as much damage as legal repression. Dozens of almost famous writers saw their promising careers nipped in the bud: people like Helen Maria Williams, James Montgomery, William Frend, Gilbert Wakefield, John Thelwall, Joseph Priestley, Dr. Thomas Beddoes, Francis Wrangham and many others. UnusualSuspects tells the stories of some representative figures from this largely lost generation, restoring their voices to nationalistic historical accounts that have drowned them in triumphal celebrations of the rise of English Romanticism and Englands ultimate victory over Napoleon. Their stories are comparedwith similar experiences of the first Romantic generation: Coleridge, Wordsworth, Southey, Lamb, Burns, and Blake. Wordsworth famously said of this decade, bliss was it in that dawn to be alive, but to be young was very heaven! These young people did not find it so-and neither, when we look more closely, did Wordsworth.