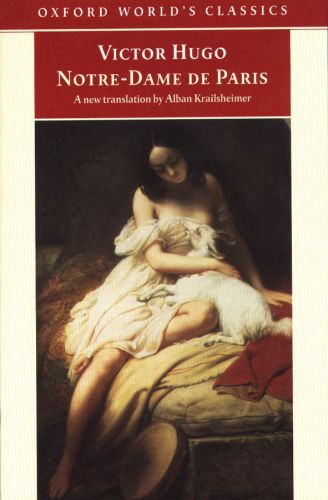 Three extraordinary characters caught in a web of fatal obsession are at the centre of Hugo's novel. The grotesque hunchback Quasimodo, bell-ringer of Notre-Dame, owes his life to the austere archdeacon, Claude Frollo, who in turn is bound by a hopeless passion to the gypsy dancer Esmeralda. She, meanwhile, is bewitched by a handsome, empty-headed officer, but by an unthinking act of kindness wins Quasimodo's selfless devotion. Behind the central figures moves a pageant of
picturesque characters, ranging from the cruel, superstitious king, Louis XI, to the underworld of beggars and petty criminals. These disreputable truands' night-time assault on the cathedral is one of the most spectacular set-pieces of Romantic literature.

Hugo vividly depicts medieval Paris, where all life is dominated by the massive cathedral. His passionate enthusiasm for Gothic architecture is set within the context of an epic view of mankind's history, to which he attaches even more importance than to the novel's compelling story. Alban Krailsheimer's new translation is a fresh approach to this monumental classic by France's most celebrated Romantic.