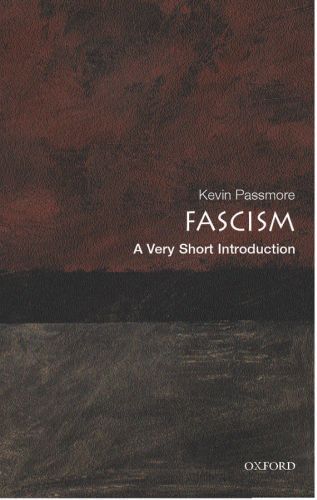 What is fascism? Is it revolutionary? Or is it reactionary? This book argues that it is both: fascism unleashes violence against the left and ethnic minorities, but also condemns the bourgeoisie for its 'softness'.

Kevin Passmore opens his book with a series of 'scenes from fascist life' - a secret meeting of the Romanian Iron Guard; Mussolini meeting the king of Italy; a rally of Hungarian doctors calling for restrictions on the number of Jews entering the profession; the shooting of 1800 Jews by Reserve Police Battalion 101 at Jozefow in Poland in July 1942. He then looks at the paradoxes of fascism through its origins in the political and social crisis of the late nineteenth century, the history of
fascist movements and regimes in Italy and Germany, and the fortunes of 'failed' fascist movements in Romania, Hungary and Spain. He shows how fascism used and uses propaganda and popular culture to propagate itself and how it exported its ideas outside Europe, through Nazi and Spanish post-war escape
routes to Latin America, for instance. The book concludes with a discussion of the recent revival of the extreme right in Austria, Italy, France, and Russia.

ABOUT THE SERIES: The Very Short Introductions series from Oxford University Press contains hundreds of titles in almost every subject area. These pocket-sized books are the perfect way to get ahead in a new subject quickly. Our expert authors combine facts, analysis, perspective, new ideas, and enthusiasm to make interesting and challenging topics highly readable.